School is basically about education and helping students to prepare for life after school. But there are still some differences from school to school.

The biggest difference in physical appearance is actually the classroom itself, because looking at the most Tomball classes everyone has his own desk and chair. Not so in Germany, where you normally share a desk with up to four people. It looks like this: 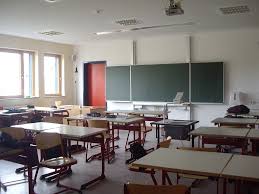 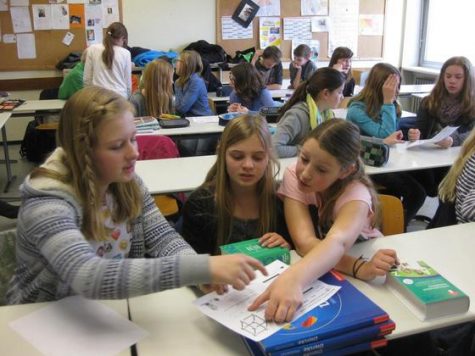 This has advantages and disadvantages:

When the students are sitting very close to each other they have the opportunity to help each other if someone have some problems. And working together also creates a community in class, because the students interact with each other. Also it is easy, if the students have a group project to do, to create groups, because you normally create a group with the students, who are sitting next to you. And most of the time those are your friends. But it also means a lot of students will not pay attention in class, because they will talk instead with their friends. And that’s interrupting and annoying the teacher. So it happens that the teacher gets really mad. It happens sometimes that the teacher doesn’t like how the students are seated, because of the non-stop talking. So he or she replaces some students and get them a new seat, most of the time this solves the problem with talking.

Here are some more pictures of a German classroom: 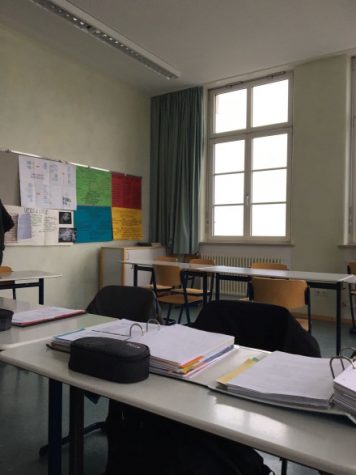 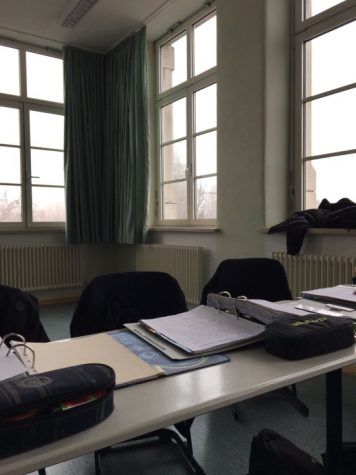 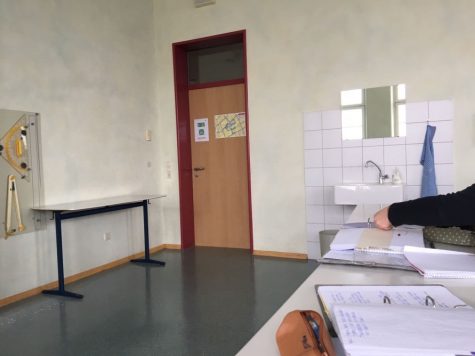 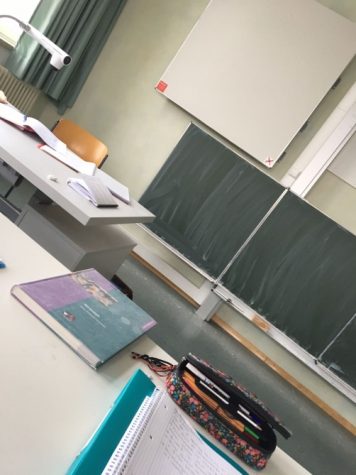 Also the teachers’ place does look different in Germany. They don’t have a computer in the room classroom for the teacher; the reason therefor is the different school system, which will be explained later on. But this is how the teachers place look like in Germany: 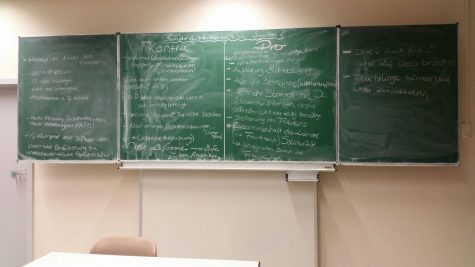 So the teacher has his own desk and a chair, always in front of the whole class. And as you can see Germany doesn’t use the smart boards. They always write on the chalkboard.

There are differences in the school system as well, the biggest difference being the schedule. German schools have a different schedule for every day, and the students have this subject with the same class. It looks like this:

This is a simple example of a German schedule, and as a student you have all these subjects with the same class, the whole school year. After the first semester the schedule changes completely, but the class is still the same.

And because they have different classes every day, they also have a different time when school ends. Normally school starts about 7:45 a.m. and ends at 1 p.m. But normally twice a week you have school till 3 or 4pm. Buy they get an hour break to eat. And it’s not forbidden to leave campus, so most of the students walk into the city to get some food. Or some students just stay in school and walk around or play ping pong. This is what students also do in their 15 minutes break. Yes, the students get two 15 minutes break a day. In this time most of the students go outside on the campus, this is what the “Johann-Vanotti-Gymnasium” looks like: 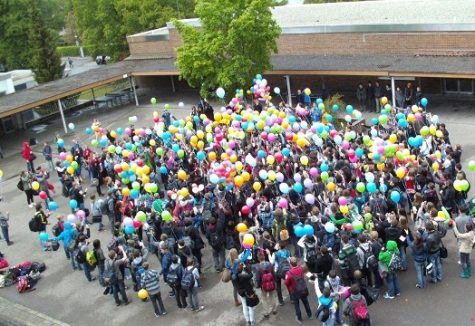 The biggest difference between the American school system and German school system are the grades. Germany doesn’t have the major and daily grades system, or final exams and the end of the semester. And they don’t have multiple choice tests.  So this is how the German grades work:

In the subjects German, English, Math, you have 4 exams in the whole school year. In all the other subjects (physics, chemistry, history, etc.) you have 2 exams in the whole school year. And then in 6th grade you choose between Latin and French (it depends on the school, but most of the time its Latin or French). And whatever you choose, you will have this subject at least to 10th grade and you have 4 exams a year as well. Because in Germany you don’t choose your classes, only in 6th grade, 11th, and 12th, but only a few.

“I think the biggest difference is the school system itself, the difference with the grading,” Lucas said.

Carlos added, “Yes, the school system between America and Germany is completely different.”