Captain Marvel Movie Review: A Bland and Forgettable Movie in the MCU 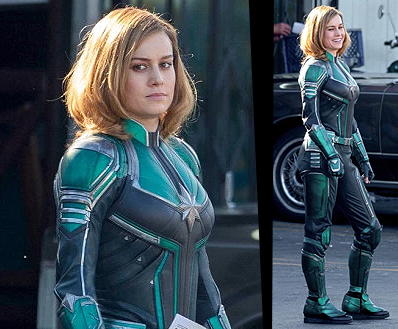 Captain Marvel is a movie that has two primary goals. One is to introduce the new heroine, Captain Marvel (obviously), and the second is to lead into the events of Avengers: End Game, which hits theaters in April. Based solely on these two goals, Marvel succeeded. However I can’t help but feel incredibly underwhelmed and a bit fatigued with the new entry into the MCU. Superhero fatigue has been a long awaited inevitability for many viewers, and I have been constantly surprised by Marvel’s ability to stay fresh and relevant in a oversaturated genre. It wasn’t until I watched Captain Marvel that I truly began to feel as though I had seen some variation of this movie before. To be frank, overall I wasn’t that impressed. The opening Marvel logo has a touching tribute to Stan Lee, which was a nice way to start though.

Marvel as long been criticized for sticking to the same story structure for every single movie. I understand the three-act structure is universally used, but Marvel seems to use the exact same plot points and story arches for every movie. Captain Marvel unfortunately is no different. Without spoiling anything I’ll give a quick broad synopsis: An overpowered character with unique abilities must save the world from an alien infestation with comedic relief side characters. This basic logline could fit many Marvel movies.

Although I must admit, Captain Marvel does have some interesting twists and turns. These certain alterations to the storyline make Captain Marvel at times stand out and excite, but these changes are few and far between, and don’t add enough to make up for the film’s overall predictability. The simple fact of the matter is that this movie does not do enough to differentiate itself from the other movies.

When watching a Marvel movie, you can always count on amazing set pieces, action sequences, and special effects. Movies like Iron Man, Captain America: Civil War, Avengers: Infinity War, and Ant-Man and the Wasp all had great special effects and fight sequences, whether it be car chases, large battles in Wakanda, or superhero fighting in an airport hanger. I was honestly disappointed with Captain Marvel’s lack of visual prowess. Most of the action was uninventive and subdued, anything that seemed remotely cool has been done and redone by Marvel. If you’ve seen lazers and space battles before and aren’t impressed by them, then you won’t be a huge fan of the special effects.

Brie Larson, who has won an Oscar in the past, seemed incredibly bland. It was most likely the writing but there really was no character development, and at times it felt Larson was confused as to who she was supposed to be. Randomly, she would crack a one liner like Thor, but then be serious like Black Widow. The character felt like a murky puddle of water, not clear, nor digestible. Samuel L. Jackson’s transformation has a younger version of Fury was entertaining, and he was a good addition, even though at times it seemed like he fell in the background of the story.

Captain Marvel wasn’t a bad move, it just wasn’t good. To me it’s like a vanilla milkshake, not the best, but not especially bad. It truly didn’t tie into Avengers: End Game until the first post-credit scene. This movie felt like it was made because Marvel needed someway to introduce the character and needed to fill time before the finale, not because they had a good idea or a good script. All in all, 10 years from now Captain Marvel will be forgotten, and just a movie sandwiched between Avengers: Infinity War and End Game.